We are industrially, environmentally, dietarily and medicinally poisoning ourselves, and our pets into disease.  This theory has generated the movements toward ecology and health food.

We are industrially, environmentally, dietarily and medicinally poisoning ourselves, and our pets into disease.  This theory has generated the movements toward ecology and health food.

We know that environmental pollution is hazardous and creates volatile toxins. We have proof that cooking and processing alters the chemical properties of food, destroying nutrients and creating volatile toxins. We also know that deficiencies and toxicity, not microbes, cause loss of cellular integrity and degeneration resulting in disease.

Consumption of any cooked or processed food, and exposure to pollution creates toxicity, imbalance, and deficiencies. When enough toxicity accumulates, resulting in compound cellular damage and degeneration, disease develops.

How much does it take to develop disease and how do we reverse it? In weaker bodies a little toxicity is enough to create disease. Toxins must be dissolved and discarded. The accumulations of the by-products formed and released from dissolving or discarded toxins also must be isolated and removed. That isolation, dissolution, neutralization, secretion, and excretion of toxins is called detoxification. 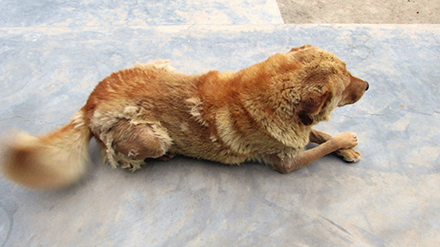 Symptoms such as nausea, vomiting, diarrhea, edema, failed appetite, insomnia, aches and pains, lethargy, impotence, weight loss, colds, flu like symptoms, and even immobility are indications of detoxification. Detoxification Is necessary to reverse disease. It is the body's way of cleansing itself of toxins. Swelling for instance is a sign of increased circulation required to dilute and remove toxins and to increase nutrients to toxic areas.

What I have experienced in the last 44 years is that a raw food diet gradually reverses almost every disease that has been created from improper feeding of processed foods. Over that period of time, scientific evidence has proved to me that raw, unheated, non irradiated, unprocessed food promotes and generates good health and well being and reverses disease.  I can testify to those truths from experience. I have found that pets fed health-giving food, which is raw food suited for them anatomically and biochemically, is the food of choice. It is barf that makes the difference.

Many veterinarians are finding that an effective tool for easing the stress on the liver is converting the animal to a fresh raw meat diet. It is an effective way to reduce the ingestion of toxic chemicals and give the body a chance to build up the immune system to help fend off unwanted diseases.

How Can a Raw Food Diet Help Pancreatitis?

The Cat’s Out of The Bag

Feeding Dogs and Cats - What is the True Cost?

Detox For Your Pet