March is here and Spring is just around the corner. With that brings warmer, longer and brighter sunny days, and the dreaded inevitable messy thaw and the piles of dog poop around your yard. But one bonus we have with our pups that are on the BARF World® raw diet; this task doesn’t seem nearly as daunting!

March is here and Spring is just around the corner. With that brings warmer, longer and brighter sunny days, and the dreaded inevitable messy thaw and the piles of dog poop around your yard. But one bonus we have with our pups that are on the BARF World® raw diet; this task doesn’t seem nearly as daunting!

Why does a RAW diet help with a decrease in your pet’s stool?

All of the components in a raw diet are designed to be used by your pet. Nothing goes to waste. All the parts of the diet have a benefit including digestion. The various food sources such as raw meat, bones, fruits, veggies and other nutrients are much greater in volume in a RAW diet than the unnecessary fillers in kibble. The reason; the sheer volume is down to less “crap” your pet is ingesting. The fillers and additives in these dry foods are passed straight through their system without being used. The reason is simple, because your pup has eaten much less of what it can’t process and is able to absorb more of the ingredients, so very little remains, resulting in very little waste. The less garbage that goes in, less junk comes out! The stools of a raw fed dog are usually less frequent, much firmer, smaller, less smelly and generally easier to pick up. Another benefit is it should take very little effort to pass, ensuring natural anal gland emptying.

Picking up after your RAW fed dog vs. kibble

A huge benefit for pet parents who feed raw, their pet’s poo is frequently easier to pick up. Usually your furry friend’s stool output is less than half of the size it had been from feeding kibble. The waste 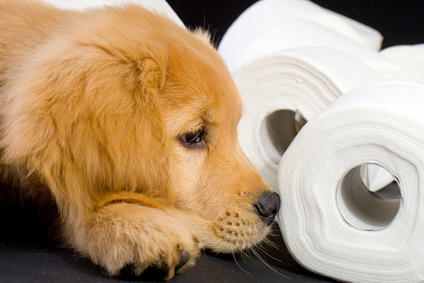 from a kibble fed dog will often remain the same size, texture and shape long after it has passed. This is due to the amount of preservatives used in the dry foods. More junk your pup doesn’t need! In preserving the food, chances are it also is going to preserve the waste. The stools of your pets that are fed dry food are more of a hassle to clean up due to size and texture.

When it comes to your raw fed dog you will first notice how much less waste you have to pick up. The dog will pass stools less often and when they do,  it is usually 2 or 3 solid lumps rather than a huge pile of poop. Additionally on a dry, sunny day, raw fed dog stools will often dry very quickly and crumble into a chalky dust. These solid, smaller stools will be neater, and easier to pick up. Also cleanup becomes much simpler when you don’t have to carry around a large messy, stinky bag (sometimes double- bagged!) of poop on your walks or at a dog park.

Pups on a raw diet have stools that become almost odorless, small, and quite firm. The stinky smell will reduce significantly if not disappear altogether) because the offensive odor that comes out has been eliminated by what is not going in! The solid, smaller stools are usually far less offensive compared to the smell of a kibble fed dog; due to all the unnecessary garbage listed above that your pup has been ingesting. Cheers to no more stinky poos!

It’s safe to say that the contrast between a raw fed dog and a kibble fed dog is wonderful when it comes to waste. If you’re like us, you won’t miss big, squishy, stinky piles of poop one bit! Switching to a BARF World® raw diet not only is beneficial for your pet but gives you more of that precious, fun outdoor time with your four legged friend.

Who Let The Dogs Out?

And They Call It Puppy Love